Beyond the tax cuts, December 2017’s Tax Cuts and Jobs Act provided another potential boon to investors by introducing the Opportunity Zone Program. Designed to enable the government to recapture embedded gains that have been shielded from tax via the 1031 program, the Opportunity Zone Program (QOZ) simultaneously extends an olive branch to investors by giving them the ability to invest in a tax-free or extremely tax advantageous structure. At first glance, the program seems great: As a taxable investor, I get to defer paying taxes on capital gains, reinvest those dollars, and avoid future tax on the appreciation of that investment. At the same time, I’m making a double bottom line investment by advancing the social good while also earning profit. It sounds great.

However, the structure, implementation, and timeframe of the legislation create a perfect storm fraught with peril, which will leave many investors upside down with a tax bill, to boot. First, there are a whole host of areas in the legislation that require clarification in order for both investors and fund operators to administer QOFs and execute QOZ investments with a sufficient degree of confidence so as to remain compliant with the program’s requirements and achieve the slated tax benefits. We are already more than a year past the introduction of the program, and there are still significant outstanding issues that require additional guidance. The effective starting date of the program continues to delay, while the expiry deadlines remain fixed; thus, abbreviating the eligible window and causing many capital formation groups to make ill-informed and hasty decisions on the structure and administration of investment vehicles (QOFs). While guidance from the IRS has since expanded the window for the ultimate sale of QOZ assets and liquidation of QOFs, investors must still contribute their gains to QOFs before YE 2019 in order to take advantage of the maximum benefit under the law, a 15% basis step-up *and* the tax-free gain after a 10-year hold period. This has capital aggregators scrambling to form vehicles to cater to investors clambering to place their eligible capital gains at present day.

The storm gets worse. In response to the above quandary, you might say that it would be wisest to sit on the sidelines until the regulations get sorted out, watch other people stub their toes, and learn from their tumultuous experiences. However, those who adopt this approach will see the best deals pass them by. As time passes and more QOZ capital assembles to chase a finite number of deals, asset prices will rise while relative returns begin to drop. On-the-margin QOFs will also be forced to chase riskier or lower returning deals.

In the case of a normal closed-end PE fund, if you raise money and don’t find adequate deals that fit the return profile that you’ve socialized with your investors, you can simply return the capital to your LPs. Sure, they’ve suffered an opportunity cost having their dollars tied up with you, but any LP would much prefer that scenario to getting stuck in a bunch of underperforming illiquid assets for an indeterminate amount of time. This scenario – returning dollars to LPs – simply isn’t possible in the QOF world. LPs would have intentionally taken gains to then contribute to your QOF with the intention of getting the full tax benefit and won’t be expecting a tax bill until 2026. Returning capital to them before the key QOF deadlines (5, 7, and 10 years) would carry with it a tax bill. GPs should expect a lawsuit in exchange for the delivery of that tax bill! Accordingly, QOF managers will have a very strong incentive to deploy capital at all costs, regardless of the risk/return profile of the investments.

All of the above aside, the QOF program could still be incredibly advantageous to investors if executed properly. We’ve shown how this might be easier said than done. We have also identified four key “Danger Zones” below that investors can look for so that they don’t get caught sideways on the wrong side of the law or in a poor-performing deal.

Not all Opportunity Zones & Opportunity Zone Deals are created equal. Each state had the discretion, within certain guidelines, to designate the zones within their borders. Predictably, different state governments took varying approaches to designating areas – some much more investor-friendly than others. For instance, it is not difficult to understand that the risk/return profile of a QOZ in downtown Hollywood might be better than rural farmland in Montana. Simply carrying the QOZ designation does not make a site an attractive investment. This should be self-evident, but beware of “wolves in sheep’s clothing” being peddled by commercial brokers:  undesirable land dressed up with the Opportunity Zone label, hoping to trap some unwise opportunist with the promise of a massive tax-free gain. Not every asset or deal is the best fit for a site, even when considering the QOZ tax benefits.  A deal should stand on its own, independent of tax benefits. A good deal is a good deal regardless of any special tax enhancement. Beware of anything that only looks attractive when looked through the lens of after-tax returns.

PITFALL AVOIDANCE STRATEGY #1: Look for sites with the highest demand. Proximity to urban centers is a good proxy for risk. Benchmark deals against similar projects located outside of opportunity zones and make decisions, based on investment considerations, not tax benefits.

Development (or heavy value-add) deals are difficult to execute well.  By definition, opportunistic real estate investing (development, redevelopment, heavy value-add) is the riskiest type of real estate investing – you are trying to predict the future by creating a product that does not currently exist and anticipating a demand that has not yet proven itself in reality.  As such, investors demand a higher return from development deals than they do from all other types of real estate transactions because of the commensurate risk.  It might seem easy:  find a piece of land, hire an architect and engineer, develop plans, work with city planning, hire a general contractor, build a building, and hire a property management company to lease it up.  However, do you have the ability to identify the highest and best use for a site, to know exactly what demand factors exist (or will exist when the building comes online), how to manage a project so it hits your forecasted budget and schedule, and how to most rapidly stabilize the asset?  Once all of those things are done, do you know how to position the asset for sale at the highest price possible?  There are very few developers who survive economic cycles with the skills and experience to consistently execute development projects well.

PITFALL AVOIDANCE STRATEGY #2: Only partner with developers who are experienced and have a track record of success. Ideally, partner with groups that have shown the ability to weather economic cycles.

Regulatory Compliance is the least sexy “Danger Zone” here but merits just as much consideration as the other areas.  As an investor contributing gains into a QOF, you are completely reliant on that fund manager to (a) keep you compliant and (b) ensure that you capture the maximum allowable benefit under the law.  Accordingly, it would be unwise to partner with groups that have little or no experience dealing with creating and administering capital vehicles with multiple investors.  By definition, every group will be forming their first QOF, but some of these GPs will have significant experience with previous investor vehicles of varying type and complexity.  Take time to review this history and also understand who their tax, legal, and compliance advisors are.  For instance, who helped them form their fund, who will perform the annual audit, and what compliance procedures do they have?

Avoid investing with funds that have not identified deals.  As we’ve previously noted, there is already a rush of capital chasing a very finite number of deals that have inflated asset prices even before any QOFs get off the ground.  PEG has been approached with term sheets from a number of large, name brand real estate platforms that are raising large QOFs and hoping to white-label PEG’s deals for their own fund.  We know that these large groups are having a much harder time identifying deals than they had anticipated, and in many cases, already have investor dollars committed without a place to put them.  You don’t want to get caught in a vehicle like this with a ticking clock and a looming tax bill.

PITFALL AVOIDANCE STRATEGY #4: Invest only in QOFs with preidentified deals.

For the sake of further educating the public and uncovering other pitfalls of QOZ investing, PEG has launched an online opportunity zone resource called opportunityzones101.com.  Please visit the site to download our free printable guide to opportunity zone investing, get in touch with an expert, calculate your potential after-tax returns, and learn about joining our QOF. 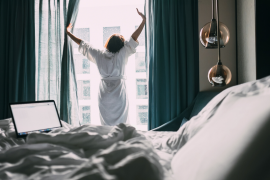