Some of the most common questions I hear lately speak to feelings of uncertainty about the current investment market – “What is the market doing?” “Are we headed for another downturn?” “Is it even safe to invest in real estate right now?” These are fair questions, especially when considering that we are now in the longest bull market since World War II. To maintain market stability, the Federal Reserve has steadily cut interest rates to a range between 1.75 and 2.00 percent. Additionally, because of compressed cap rates in today’s market, cash yield to investors is decreasing. Using the inverted yield curve as a predictor of recession, experts are estimating that the market could finally recede in late 2020 or early 2021. While the truth is that no one can guarantee what the future holds, we can draw significant insight through carefully evaluating past recessions and a variety of indicators that preceded them.

The Great Recession [2008 – 2010] There were several compounding causes for the Great Recession. Some of the significant reasons for the crisis include the Federal Reserve’s failure to regulate the financial industry, the industry’s risky behavior with toxic mortgage lending, overvalued real estate, and an exuberant amount of borrowing by consumers or corporations, which led to a housing bubble. In contrast, today we are seeing tightened-up regulations on lending practices, and banks have adopted strict policies aimed at preventing exposure to overvalued real estate.

The Dot Com Bubble [2000-2004] Internet companies were on the rise and investors were eager to throw their money into “growing” companies. As these companies grew in valuations, investors failed to focus on how companies generated revenue and profits. The market witnessed companies go from $300M valuations to $0 within 18 months. While analysts ignored company cash flow, they also used very high multiples in their models, resulting in excessively high values. Similarly, today, we are seeing most of the sale of private companies being transacted by one private equity group to the next, instead of strategic buyers or through an IPO. Another similarity between the market today and the bubble in the early 2000’s is that valuations are being based on equity multiples and investors are ignoring cash flow. In my opinion, private equity transactions – not real estate – could be the cause of our next downturn.

Real estate is cyclical but has always been a great investment for me personally, for PEG Companies, and for our investors. Employing a disciplined strategy, PEG withstood – and even grew considerably – during the last recession. Our strategy today is no different. We will continue to stay true to our values: conservative valuations, modeling, and focusing on cash flow to the company and our investors. We do not fall victim to over-paying for our assets and we scrutinize every deal to ensure that it can ride out market cycles. Personally, I feel quite optimistic because the U.S. is currently seeing the highest liquidity ever in the market at $2 trillion. We also see banks enforcing stricter regulations so that assets are not over-leveraged, and unemployment is at its lowest in 50 years. Yes, the market is tight with high construction and land costs, but rest assured, it is also strong. There are creative deals to be structured, and if there is a downturn, PEG is well-positioned and prepared not only to weather the cycle but to take advantage of it. 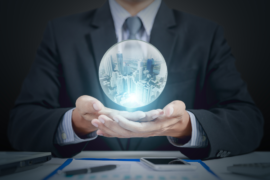