Which Came (Back) First, Revpar or Valuation?

I attended a virtual conference some weeks ago titled “Distressed Hotel Economic Forum,” which was a series of virtual forums and lectures by numerous experts representing a variety of disciplines, ranging from hospitality and lending to finance and economics.  One presentation was of particular interest, wherein Robert Kline, CEO of Chartres Lodging Group (CLG) shared some interesting data regarding hotel performance recovery following a market shock of some nature.  In this case, CLG followed recoveries post 9/11 and the 2008 Global Financial Crisis (GFC).

Mr. Kline’s measures of performance during the recovery period focused on three key metrics—hotel valuations on a $ per key basis, sales volume of hotel acquisitions/dispositions, and revenue per available room (Revpar).

Initial thoughts were that Revpar would slowly return through a combination of better occupancies at perhaps slightly lower rates, leading to some uptick in transactions as buyers looked for bargains before valuations got too high in the improving economy, followed by a return to normal levels of acquisition/disposition as both valuations and transaction volumes improved.

CLG research indicated something different.  While the low points of all three metrics were closely correlated in terms of timing (if not depth), their recoveries varied widely.  First, they saw a return to pre-downturn valuations, followed by transaction volume, with Revpar bringing up the significantly distant rear.  In fact, the return to pre-shock Revpar levels lagged pre-shock valuations by anywhere from 18 to 30 months.  The chart below is re-produced with permission from Robert Kline and Chartres Lodging Group.

There are any number of ways to compare and contrast these two downturns with the current recession caused by the global pandemic.

Somewhat discouraging is that our current crisis seems to be leading to a longer, and perhaps deeper, descent when compared to the 2008 GFC and 9/11.  We may still be searching for the bottom in this COVID era, particularly in hospitality.  Many experts believe we will not see a return to pre-COVID levels of Revpar until 2023.  While we have seen some improvement in occupancy across our portfolio, rates continue to lag as supply far exceeds current demand.  At times, we feel like a yo-yo on a string, with some positive momentum followed by reports of additional case counts, lack of progress on additional government stimulus programs, and further troubling economic data.

As with any challenge, there are some silver linings.

Relatively speaking, PEG’s hospitality portfolio is faring well.  Most of our hospitality assets are in limited and focused service segments that have not been affected as drastically as the large convention center, airport, luxury, and full-service products. Many of our properties are in markets where lockdowns were less severe.  Others were considered ‘essential services’ and allowed to remain open while most other businesses closed.  We have been able to employ or re-employ many of our associates, thus contributing to the overall economy.  Our hotel teams, inclusive of GM’s, operations, revenue management, and sales and marketing teams are finding new and creative ways to attract guests, maximize revenues, and drastically reduce costs.  The lessons learned as we have been compelled to adapt to this new normal, particularly in cost cutting measures, will lend to better margins once rates and occupancy return.

The timing of PEG’s strategy to convert extended stay hotels into multi-family housing is ideal.  There is currently a shortage of affordable housing and an excess of hotels.  For groups like PEG, with capital to deploy, the opportunity to pick up additional extended stay properties at low valuations will only add to the success of this strategy.  This conversion approach is beneficial for a number of reasons.  PEG is addressing the need for affordable housing and improving the communities in which they develop with an affordable, quality product.  Additionally, as distressed hotels are converted and re-tasked for other uses, the reduced inventory of rooms available will eventually lead to higher rates as demand catches up and begins to exceed the available supply, thereby benefiting the surviving hotels.

Valuations in the two market shocks observed dropped steeply in the early stages of the downturn but also recovered more quickly than Revpar and transaction volume.  As mentioned above, for those with capital to deploy, the bargains may be available now and in the very near future as uncertainty in the recovery leads some hoteliers to decide that selling at a discount is a better option than the carrying costs of an underperforming hotel.  Conversely, for those ‘holding on’ in hopes of a return to normal once effective treatments and/or vaccines are developed, the accelerated recovery of valuation as compared to Revpar may mean that carrying that borderline asset for a few more months yields a better exit price.  Stephen Rushmore, President and CEO of HVS, a hospitality consulting firm, shared his opinion that the best deals would likely happen over the next 6 months.  Of course, timing the bottom is difficult.

PEG continues to move forward confidently in its strategies, the capabilities of its teams, and the goal of being the best full-service real-estate investment firm in the industry. 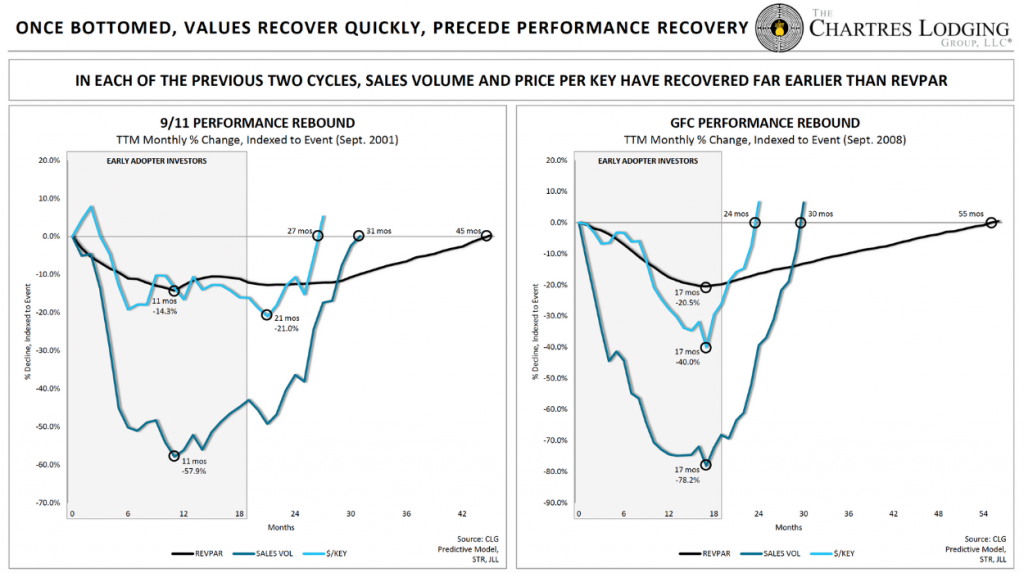