Revenue metrics have long been the hotel industry’s primary performance indicator when evaluating properties. While useful, revenue is only one piece of the performance puzzle.  A much more informative and useful measure would include operational profitability as the benchmark to compare across properties.  Using a consistent profitability statistic as an industry-wide benchmark can help owners and operators more adequately compare properties and investments, help revenue managers determine the best pricing strategies, and help operators control costs.

Revenue Per Available Room or RevPAR, has historically been the hotel industry’s primary benchmarking statistic.  Hotel room revenue has two components – the number of rooms sold and the rate at which they are sold.  This is referred to as Occupancy and Average Daily Rate (ADR).  RevPAR is calculated by dividing the hotel’s revenue by the number of total rooms the property has available to sell.  RevPAR is simply a calculation of the average revenue each room of the hotel generates per day.

Hotel performance benchmarking has been stuck with this metric alone for far too long.  To truly know how a hotel is performing, a much more complete benchmark is known as GOPPAR, or Gross Operating Profit Per Available Room.  This metric, instead of revenue, is calculated by dividing gross operating profit (GOP) by the total rooms the hotel has available to sell.  It gives a hotel owner/operator a more complete picture of how efficiently the property is operating. This is an easy enough metric to calculate for one’s own hotel; however, the industry has a long way to go in using it as a widespread benchmark.

There are numerous data aggregators that make RevPAR widely available, but there are very few that collect enough financial data to provide GOPPAR across a group of hotels, or the broader industry.  GOPPAR is the great equalizer for hotel comparisons because it considers the entire picture of both revenue and expenses.  Using RevPAR only can give a distorted picture of how the property is performing or can be expected to perform in the future.  For example, comparing two properties with the same RevPAR, one being in a relatively low wage market and the other in a high wage market, would not indicate a difference in profitability. Assuming all else is equal, the hotel that has to pay higher wages would be less profitable, but this would never be known when benchmarking top line KPIs alone.

Measuring GOPPAR performance over a period of time can also direct revenue management strategies for profit maximization, rather than revenue maximization alone.  Knowing how the right mix of occupancy and rate affect profitability is a growing demand of revenue managers.  To Illustrate, CBRE, one of the leading industry forecasting firms in the country, completed a multi-year study of this subject which included nearly 3000 hotels.  In a nutshell, they found that profitability peaks when incremental growth in revenue is generated through 65% occupancy and the remainder in rate.  With the growing availability and extent of data aggregation, savvy hotel companies are using the correlation of the composition of RevPAR with its effect on GOPPAR (see graph below). What this means is, with enough of the right data at our fingertips, revenue strategy can now be statistically guided by the mix of business that yields the best profitability.  While the old saying that “revenue hides a multitude of sins” is anecdotally true, it does not keep teams focused on maximizing the bottom line.

Finally, in times of revenue growth, GOPPAR helps operators control cost creep by indicating less operational efficiency.  For example, revenue at a particular hotel or market can be increasing, while at the same time GOPPAR is decreasing.  Recognizing this trend will prompt an operator to take a closer look at costs.  This is all the more relevant in a downturn, as GOPPAR helps guide the operator to flex operations adequately and minimize revenue shortfalls. 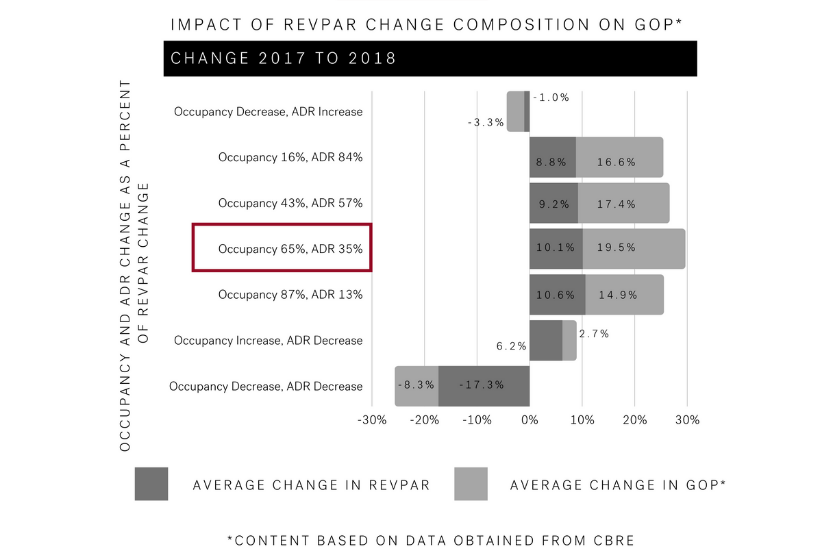